Comments Off on Why are Panerai Luminor 1950 Watches So Popular?
Tweet this
by webmaster

Why are Panerai Luminor 1950 Watches So Popular? 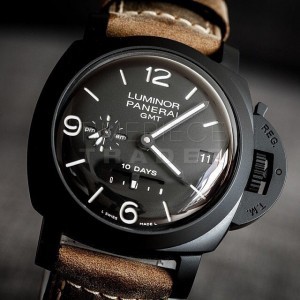 The Panerai Luminor 1950 has become one of the most popular Panerai models among watch collectors. This seems to derive from the idea that it combines a minimalist military style and an iconic case. First things first we need to talk about the watchmakers background as it is necessary to understand the circumstances under which this watch was created and its understanding of Panerai’s history.

In 2002, Officine Panerai released a Special Edition model known simply as the Luminor 1950 or it’s nickname among Paneristis as simply the “Fiddy” ( sounds like “fifty” for 1950). They limited the piece to just 1,950 units, and so it wasn’t long before the Fiddy started exchanging hands at well above its listing price. Even now, many years later, it is trading hands for more than double its list price.

The Panerai Luminor 1950 Base Model

Since then the Fiddy has had Paneristis demanding the watch maker for a “base” Fiddy. Base in watch talk refers to a simple watch with just the hour and minute hands and nothing else. In addition, the watch should be a regular production piece (not limited) so that every collector can have a chance of owning one at a slightly less expensive price of a special edition. Panerai listened, and in 2011 introduced the PAM 372 – a two hand 1950-style model that was not a limited edition.

The Panerai Luminor 1950 in Demand

As a result, the Panerai Luminor 1950 model – PAM 372 is one of the most sought after Panerai watches in recent times. The demand is high and very few of these new timepieces can be found lately. Similar to the Fiddy, the PAM 372 also comes with a 47mm 1950-style stainless steel case, but with a few differences. For instance, the case is completely polished stainless steel instead of brushed. However, the trademark “device protecting the crown” retains its brushed finishing. Also, the watch case also has a slightly different shape. It’s less bulky and has a cushion-shape silhouette that is more reminiscent to the Radiomir collection of Panerai watches and also has thinner lug pins.

These minimal changes to the watch case has had a serious effect on how the Panerai Luminor 1950 is seen and ultimately wears. Overall, it seems less heavy, and despite its massive size, it wears better than the smaller 44mm Luminor 1950 timepieces. It’s less bulky, and wears much closer and more tighter to the wrist.

As for the overall size, the PAM 372 employs the Panerai in-house P.3000 movement, a hand-winding calibre that measures 16½ lignes – roughly 37mm. The timepiece has a sapphire case back that displays the movement.

A collector should look at how the watch fits the owner as a whole and many people are overlooking height as a factor. Despite its size, the Panerai Luminor 1950 is created to fit most any wrist.