The Most Expensive Panerai Luminor 1950 Ever Sold 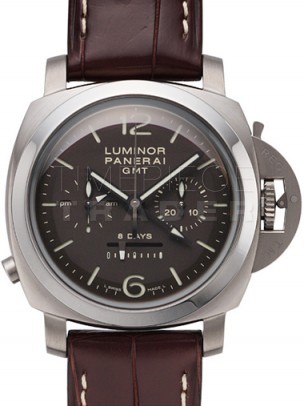 The Panerai Luminor 1950 Tourbillon Equation of Time Watch is the most expensive 1950 Luminor sold fetching an impressive $248,400. This Panerai timepiece honors fans of technical grand complications, the Luminor 1950 Equation of Time Tourbillon is dedicated to the genius of Galileo Galilei, combining some of the rarest, most exclusive and alluring specialties in watch-making.

There are only 30 known examples of the Panerai Luminor 1950 Equation of Time Tourbillon Titanio  and it is the most technically refined wristwatch ever produced by Officine Panerai: a tourbillon with equation of time, indication of sunrise and sunset chosen by the purchaser with a representation of the night sky of the same city on the back plate. The watch functions are: a date window at 3 o’clock, alongside a small dial that shows the month with a hand; sunset time; equation of time; sunrise time and lastly a small seconds at 9 o’clock, where the rotation of the tourbillon.

The watch’s Luminor 1950 titanium case is 50 mm in diameter weighs less, but users have the option to choose a rose gold case. Waterproof to 10 bar (about 100 meters), the case has the typical crown-protecting bridge, brushed titanium like the case body, while the anti-reflective sapphire crystal is held in place by a bezel with contrasting polished finish.

A little background history of the Panerai Luminor 1950 evolved from the transition of the Radiomir model to the Luminor that transitioned at the end of the 1940’s. To meet the military needs of the Royal Italian Navy, which was already supplying it with high precision instruments for a number of years, Officine Panerai created the Radiomir model, a radium-based powder that gives luminosity to the dials of sighting instruments and devices. The advanced radium substance of course inspires Panerai to the use of the name “Radiomir” for this model line. The radium’s high visibility and the paint’s excellent underwater adhesive qualities immediately make the substance a key element in Officine Panerai’s production. The Radiomir patent will be the first of the many patents filed to mark Panerai’s history of innovation.

The Second World War was coming to an end, the company which was based in Florence continues the technical research begun at the start of the war, culminating in the development of the Luminor, which is characterized by the crown-protecting bridge, with reinforced wire lugs created from the same block of steel as the case, the cushion-shaped case as in the Radiomir 1940 and the flat, wider bezel. Nowadays the models with this case are known as Panerai Luminor 1950.

The Most Expensive Panerai Luminor 1950 Details

This particular feaured Panerai Luminor 1950 Tourbillon Equation of Time Watch sports a black dial and brown alligator bracelet strap with a tang clasp type and manual-winding movement. The case is made of titanium and measures 50 millimeters in diameter and 17 millimeters in thickness with a four day power reserve. The timepiece is water-resistant up to a distance of 100 meters. Other features include a tourbillon, fully protected crown-lock mechanism and anti-glare sapphire crystal.