Comments Off on Panerai Luminor 1950 Reviews
Tweet this
by webmaster

The Panerai Luminor 1950 is influenced by a classic watch that played a role assisting Italian Naval commandos during World War II. The timepiece features the brand’s P.9001 movement that was developed in-house. Their high quality construction symbolizes Panerai’s timeless tradition and commitment to excellence. 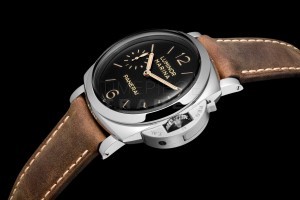 Despite its lower price point, the Panerai Luminor 3 Days GMT is equipped with almost the same advantages the 10 Days offers: a second time zone (although without a day-night display for the 12-hour hand), a power-reserve display function (but located on the back and nonlinear) and a return-to-zero mechanism for the seconds hand, which is activated when you extract the crown into the hand-setting position. Along with Caliber P.9001, which powers the watch, the family includes the basic P.9000 (with no second time zone or power-reserve to display) and the P.9002 (with a power-reserve display on the dial).

Common features of this classic timepiece brand which is designed in Italy and crafted in Switzerland offer a satin-finished and pillow-shaped case with a polished bezel, a protective stirrup with a lever made to press the crown firmly into the case, and a uniquely crafted dial that includes large Arabic numerals and hour indices. The Panerai Luminor 1950 watch is a representation and homage to the classic Panerai Luminor model, which debuted in 1950 as a watch for Italian Navy divers. but it isn’t essentially different from other Panerai watches. The apparent family similarities of its products is both a strength and a weakness of Panerai: if you aren’t partial to this unique design, you probably won’t find any other Panerai’s models that fit your taste and style. On the other hand, every Panerai watch is instantly discernible to the brand’s many fans. And judging by the resilience of Panerai’s classic retro design, the Panerai Luminor 1950 will probably be just as attractive to collectors 10 years from now and beyond – which cannot be claimed by every contemporary watch.

The Panerai Luminor 1950 does offer some features that sepaerate it from other Panerai watches. The color of the lettering on the date portion of the dial isn’t pure white, but closer to a beige. The crystals above the dials in other Panerai timepieces can be highly domed and some are slightly curved.

The sandwich dial feature, another Panerai trademark, is very classic, with an underlying glow-in-the-dark Super-LumiNova opaque. This type of construction assures the user that the numerals and indices glow uncommonly bright, which makes this watch very distinct in the dark.

For a timepiece with a manufacture movement, the price is very affordable. Few watches with in-house movements in this price point offer a comparable range of functions.